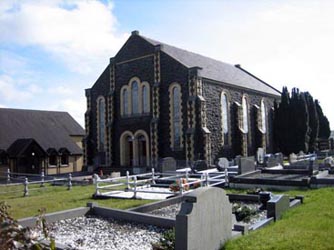 Donacloney is situated in the extreme west of County Down on the edge of County Armagh. The name Donacloney, or the alternative spelling Donaghcloney, comes from Dommach-Cluana, meaning "the Church in the meadow". Donacloney was once known for its linen factory but the factory is now closed. However, the village is growing through housing development and ease of travel to Belfast, Lisburn, Craigavon and Banbridge.

Donacloney Presbyterian Church began as a secession from Tullylish. The first church to be built at the current Moygannon Road site was opened in 1750. Its mud walls and thatched roof were replaced with a new church building which opened in 1798.  The new meeting house had a slated roof and walls of stone and lime, which were whitewashed within and without. It was oblong in shape, with the pulpit on one of the long sides. Between the pulpit and the pews there was a wide aisle with an entrance door at each end.

After the building of a manse in 1888, it was discovered that the church was suffering from dry rot. At a meeting on the 18th September 1899, a resolution to construct a new church building was adopted.  The laying of the foundation stone for the new church took place on 26th October, 1900.  The new and beautiful church building was opened with much joy and thanksgiving on Sunday, 15th September 1901. The impressive building was built with black stone and yellow brick edging. The interior was very comfortable. The pulpit was in the middle of the far wall.  There were two aisles with a row of middle pews and side pews. There was also two transepts and a fine gallery. The church was capable of holding approximately seven hundred people.

It is in this building that our congregation meets on the Lord's Day for worship at 11.30am and 6.30pm. It also has a meeting for Bible Study and fellowship on Tuesdays at 8.00pm and for prayer on Fridays at 8.00pm. There is a Boys' Brigade Company, Girls' Brigade Company and Sunday School connected to the church, as well as a Senior Citizens Coffee Morning and Ladies' Group, affiliated to Presbyterian Women.

We gather together to express our praise of God, to encourage our partners in the faith

and to exercise our priesthood in prayer